Home » About » Our People » Consultative Committees

The composition of the consultative committees is as follows:


Sinclair Munro is the fifth generation to manage The Munro family’s property Keera, located near Bingara in northern NSW.  Keera is the home of Booroomooka Angus which is one of the largest and most innovative in studs in Australia.  Booroomooka Angus was established in 1926, has over 1000 Herd Book Registered Females and a large commercial angus herd. Sinclair manages all aspects of the stud with attention to detail in producing high quality bulls to meet customer requirements.  Prior to 1996, Sinclair studied at The University of Sydney obtaining a Honours Degree in Agricultural Economics and worked for NH Foods Australia.

Frank is the co-principal of the Landfall Angus herd based in Tasmania. Landfall Angus was established in 1948 and is a foundation member of Angus Breedplan. The Landfall breeding herd now consists of more than 2000 registered females producing genetics for their clients across South-Eastern Australia. Frank is serving his third term on the Genetic Evaluation Consultative Committee and is passionate to see the future development and sustainability of the Angus breed in Australia.

Julian and his family breed seedstock and commercial Angus cattle in Mudgegonga in NE Victoria. Stellar Livestock was established in 2011 while the commercial herd first embraced Angus genetics in the 1930’s. Julian is the Central Victorian Regional Chair for the Southern Livestock Research Council (SALRC) and also represents SALRC on the Red Meat Panel for MLA. Prior to returning the family farm, Julian spent 20 years in Melbourne working mostly with IT start-ups and consultancies.

Ruth Corrigan is the 5th generation at Rennylea and is the Breeding and Genetics Manager, working alongside her parents Bryan and Lucinda and younger brother Anthony. Rennylea record 1500 cows annually and market 500 bulls into the commercial industry. Ruth has a Degree in Livestock Science (Hons) through UNE and a post graduate certificate in Agriculture and Climate Change through Melbourne Uni.

Jodie Foster farms Boonaroo Angus with her husband Shane in Western Victoria, running 500 stud cows alongside their prime lamb producing ewe flock on 4000 acres.  Jodie has been breeding Angus cattle for 18 years and has been in the stud cattle industry for 35 years. Boonaroo conducts an annual bull sale and sells 150 bulls annually.  Jodie has had 8 years experience on the National Murray Grey Board,  Technical Committee and as the Youth Development Officer.

Wendy grew up on a shorthorn stud in the Riverina NSW and along with her husband, Ben, are joint principals of  Texas Angus. The stud currently has 700 breeders and sells 300 bulls annually. All breeding decisions are made by both Wendy and Ben.  Wendy is responsible for the development and implementation of Texas’s marketing program including, social media, print, web, and all photography and videography. She also inseminates 85% of all Texas females and analyses all the data from the steers and heifers that are benchmarked in industry relevant feeder and carcase trials plus manages the herd data system.  Wendy completed a Bachelor of Agricultural Science at Melbourne University and worked in Beef Marketing at MLA for a number of years.

Ross Thompson is principal of Millah Murah Angus, Bathurst. Ross has been a seedstock and commercial producer since 1993.  He and his wife Dimity have three daughters.  Ross has been a user of Breedplan/TACE user since its inception and is a past Chairman of the NSW State Committee, past Chairman of the Angus Sure Benchmarking Program Consultative Committee, and a past member of the Angus Australia Marketing Consultative Committee.  Ross has a Bachelor of Economics Degree.

Together with her husband, Mandy established Alloura Angus in 2000.  Alloura Angus now have around 300 stud breeders and produce and market females, bulls and semen. Mandy is responsible for the genetic planning and marketing activities and has a number of tertiary qualifications with a Bachelor of Economics, Master of Demography and currently is a PhD Candidate in Population Health.


Stephen is owner and operator of Waitara Angus near Trangie, NSW.  Waitara has an Angus commercial breeding herd of 350 cows, the majority of which are included in the ASBP each year.


Lindsay is the owner of Esslemont Angus, located at Busselton, WA.  Esslemont genetics have been included across several cohorts of the ASBP. Lindsay is also a past Director of Angus Australia and past-chair of the Breed Development committee.

Rodger is the owner of Brooklana Angus, located near Coffs Harbour, New South Wales.  He has regularly nominated bulls for the ASBP.

Gary recently retired from full time work in construction and now wants to devote his time to growing Kyah Park Angus. Based at Blampied in the Victorian Central Highlands,  Kyah Park has been operational for 13 years, however it  restarted it’s stud 3 years ago with a donor cow and several embryo’s followed up by the purchase of 10 HBR heifers. Kyah Park has 1 bull involved in the ASBP and another nominated.


Lachie is the Principal and Farm Manager of Murdeduke Angus near Winchelsea, Victoria.  Murdeduke has a total of 4 bulls that have been involved in the ASBP.

Richard is the Manager of the Paraway Pastoral property Burindi Station, located near Barraba NSW.  Paraway Pastoral has a large commercial Angus herd and includes approximately 600 Angus females in the ASBP program each year.

Hamish is the program Manager for genetics research, development and innovation with Meat and Livestock Australia (MLA) based in Armidale. He started with MLA as the LAMBPLAN Project Officer in 2009 and went on to become the Sheep Genetics Manager in 2013 managing Australia’s national genetic evaluation for sheep.


James Laurie of Knowla livestock, Moppy, NSW, is a Director of Angus Australia, and as chair of the Strategic projects committee, is an ex-officio representative on this committee. 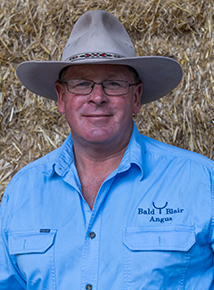 
Sam White of Bald Blair Angus, Guyra, NSW, is the President of Angus Australia, and as chair of the Board, is an ex-officio representative on this committee.


Scott is the Chief Executive Officer of Angus Australia and an ex-officio representative of this committee.

Monique is the most recent Angus Australia University of Illinois Scholar, after winning the 2019 Angus Youth National Judging Competition and has just recently returned from the US.

Monique wants to see Angus Youth continue to be the benchmark for youth development across the World and would like to see it continue to nurture and foster a love and passion for the beef industry and Angus breed among young beef breeders.

Becca is the most recent recipient of the Kansas State University Scholarship.

Becca believes that by giving Angus Youth members opportunities & resources to further their understanding of technology & current production systems, they can encourage independent thinking that can help the beef industry grow into the future.

Ruby has been involved with the Angus Youth program for many years and was fortunate to attend the inaugural GenAngus Future Leaders program in 2019.

Ruby believes that Angus Australia have by far the most developed and engaging youth program in Australia and would love to see this expanded to working with international organisations through online platforms to expand the education opportunities for young cattle breeders.


Jack has a long history with the Angus breed and has attended 11 Angus Youth National Roundups.

Jack believes that further programs in the northern parts of Australia should be a key aspect of the Angus Youth Program moving forward, along with more programs for the 18+ age group in commercial settings for livestock breeding.

With a background in Verified Black Angus branded beef and through working with importers predominantly in Asia, Sam has a vision to bridge the gap between to allow Angus Youth members to experience the reach and scope of the Angus breed both domestically and abroad.


Mark runs a fourth generation mixed farming enterprise near Chatsworth Vic. As part of this operation Mark has run the Coolana Angus stud for over 30 years, with bull sales held in both Victoria and South Australia.

Most recently with family succession in mind, the Coolana Stud was dispersed and Mark will continue to breed commercial Angus cattle.

Libby has extensive experience within both the seedstock and commercial beef industry and has been a member of the South Australian Angus State Committee for twenty one years.

Libby and her husband Bruce, managed the well-known Angus stud, The Basin for eighteen years and The Basin’s dispersal, the Creek’s took on the role of business managers for Hillcrest Pastoral Company, a commercial cattle operation running 2,500 Angus and Angus cross females in the south east of South Australia.

Libby served as President of Angus Australia from 2016-2018.

Mike and his wife Joy run The Glen Pastoral Co a 750-hectare property, near Walwa Vic that supports up to 500 breeding cows, plus heifer replacements, sale bulls and steers and heifers which are grown out for feedlots or processing for Meat Standards Australia-graded beef. This year will mark the 47th Annual On property Sale for The Glen.

Mike served as President of Angus Australia from 2013-2015


Brad Gilmour has been an Angus Australia member for 21 years and runs a large commercial Angus operation near Boorcan Vic.

Brad and his wife Marg provided one of the co-operator herds for the Angus Sire Benchmarking Program across five cohorts from 2011.

Brad has been involved in the Angus Victorian State Committee for several years and is the current President of Angus Australia.


“A large percentage of the Australian breeder herd is based north of the Tropic of Capricorn, and this has traditionally been a Bos Indicus area. Hence there is huge scope for cross breeding with Angus genetics to improve fertility and carcase traits to help meet market suitability.”

“The Northern industry is principally made up of cattle breeders that achieve 100% of their income from cattle. They are well educated on the industry and are very astute. They do not respond to being preached to by “southerners” who don’t understand their requirements. More than anything this committee needs to gather information and build understanding. We know from experience the performance results by using Angus genetics can be spectacular and can be maintained long term.”


“As meat quality is gaining momentum in the north, Bos Indicus breeders are sourcing Bos Taurus breeds to improve their carcase quality traits of their herds.  Angus Australia and its members are at the forefront of the industry for performance recording, the leader in genomics and the breed is recognised worldwide for its meat quality and excellent maternal traits. “

“With direction through an initiative such as the Northern Development program, the Angus breed and genetics can make further inroads into the northern Australia beef herds. This will ultimately expand new markets for Angus breeders and positively impact the Australian beef industry by increasing productivity & profitability through traits relating to meat quality and fertility.”


“Experience gained over 15 years of supplying Angus bulls into Western and Central Queensland has shown us that there are great benefits to be achieved for all concerned from the infusion Angus genetics into Northern herds. Northern producers can reap the fertility, temperament and performance benefits, regularly remarking that they “can’t believe how many calves hit the ground so quickly, how much those calves weigh at weaning and how easily they wean”.