Adaptability and Resilience key at “Tara”

Adaptability and Resilience key at “Tara”

Located in the Southern Gulf region of Queensland, 60km north of Cloncurry, “Tara” has been owned by the Lynch family since 1926. Dan Lynch, now the third generation, has been at the helm for 44 years, having purchased the 13,747 ha property from his father in 1976.

Now managed by Mark and Pam Suhr, Dan is based at “Stapleton” in the Northern Territory.

“Tara” consists of predominately Flinders and Mitchell grass country with some areas of pulled gidgee sown to Buffel grass and desmanthus and some lighter sandy-red country that Dan describes as ‘natural Cloncurry Buffel country’. Managed in a time controlled rotational grazing system, “Tara” has been extensively developed, with 43 paddocks roughly averaging 365ha in size, up to four watering points per paddock and a grazing radius to water of 750m.

Through this intensive management, the carrying capacity of “Tara” has improved from 1,700-1,800 Livestock Units (LSUs) to a 23-year average (prior to the last seven years of drought) of 3,050 LSUs. As a result of seven consecutive failed wet seasons and the 2019 North Queensland floods in which 40% of adult stock and 90% of weaners and calves on “Tara” were lost (as well as $500,000 worth of infrastructure), “Tara” is currently carrying 1,000 breeders and 500 head of mixed sex weaners.

Traditionally a Brahman breeding enterprise targeting the live export trade, the last decade has seen a shift in breed choice for Dan. After a chance encounter at Beef 2009 in Rockhampton with representatives from Te Mania Angus, a fixed time artificial insemination (AI) trial was devised, utilising Angus, Simmentals and Brahman semen over 800 head/year of “Tara” straight Brahman breeders. The program ran from 2010 to 2012 and was suspended in 2013 as a result of the failed wet season.

“It was the biggest fixed time AI program in Australia at that time” says Dan, “and the long and short of it was that the cross bred Brangus animals that were bred on the property adapted and performed just as well, if not better, than their cohorts”.

These results, coupled with the ramifications of the 2011 live export trade ban have made transition to an Angus crossbred a more permanent trajectory.

“Following the live export ban in 2011, we had all Bos Indicus cattle at “Tara” and in 2013 it forgot to rain. From 2011 to 2013 I was selling the Bos Indicus steers for 80-90c/kg and Angus cattle were still getting $1.40-$1.50 or more” explains Dan, “I made the decision to diversify in herds. We had to change to a breed that was in more demand than the Bos Indicus cattle because they were obviously more reliant on the live export market and we found, as a result of the Federal Governments decision in June 2011, that we were at huge peril.”

Come 2014, another failed wet season and with more than 5,000 head of Bos Indicus cattle to place that Dan “had trouble giving cattle away let alone selling them”, it ultimately resulted in the purchase of “Stapleton” in 2015 – a 160,000ha holding south of Katherine in the Northern Territory. As the wet seasons continued to fail, Dan continued to offload the Bos Indicus types from “Tara” to “Stapleton”.

“We opted to offload the Bos Indicus cattle to “Stapleton” because we learnt from the AI program that the Angus cross cattle could not hack this environment unless they were bred in it” says Dan, “and “Stapleton” is some of the toughest country in Australia to produce cattle on simply because of its low phosphorus and calcium levels.”

“Tara” was obviously the ideal place to incorporate an Angus influence because it is an equal distance to the southern market as it is to the northern live export market.

Now a 100% cross-bred herd with a significant Angus influence, the cattle bred on “Tara” are targeting the southern markets. In a usual season, male progeny would be carried through to two years of age and a weight of 400-430kg and sold direct to abattoirs and backgrounders. This year however, after having the poorest growing season on record, Dan has production fed and sold weaners.

“The beginning of this year was the least amount of pasture I have ever grown on “Tara” in the 40 years I have owned it. We grew 26 stock days/ha whereas usually, in a normal wet season, which we haven’t had for 7 seasons, we usually grow between 70-120 stock days/ha” states Dan.

Despite these conditions, Dan exerts a significant amount of breeding pressure on his breeders.

“What I have chased for the last 30 years, is fertility and adaptability. The animals firstly have to survive, that is the important thing, therefore they have to adapt. Secondly, they have to be highly fertile” says Dan.

The breeders are controlled paddock mated at a ratio of 2.5%, with the bulls going in on the 15th of January and coming out in either a muster in mid-to-late February or at weaning in May, depending on the season. Despite the varied time the bulls are in with the breeding herd, the joining period for retaining females is 63 days and preg-testing conducted in June foetal ages pregnant females into the November-January calving period.

All other PTIC cows falling outside of the calving period are drafted into a separate mob and, depending on the need for cash-flow or calves and the availability of grass they are either sold, held until calving, or kept. By drafting them into their respective calving periods, the mobs have progeny of similar age, making management easier.

If the cows that fall out of the November-January calving period are kept, they are re-joined at the same time as the core breeder herd the following year. Any preg-tested empty females or females that lose a calf are culled.

The majority of female progeny are kept as replacement heifers to be joined at two-years of age, with a small number of exceptions being culled for poor temperament and bad structure.

Through this breeding program Dan has achieved a 74% re-conception rate for lactating females.

“There are three things that influence re-conception and animal performance. Nutrition, nutrition and nutrition. If you can’t keep you animals in body score three going into calving in Northern Australia then you can’t expect them to re-conceive in their lactating period” says Dan.

After the AI program was suspended in 2012, Dan has been using home-bred bull progeny from the AI program and, more recently pure Angus bulls from Southern Australia.

“We don’t want 40-50kg calves. We also need bulls out of cows that are lower average weight, because in Northern Australia we haven’t got the pasture to support a 650kg cow. We want our cow weaning weight at about 430kg max and providing she can present us with a calf each year, she is a more economical animal to run than a 600kg cow” explains Dan.

As for the acclimatisation process for the Angus bulls coming from Southern Australia, they have found that the younger they arrive at “Tara” the better the results. Having received two consignments thus far that arrived just prior to the summer wet season setting in, the bulls are fed molasses fortified concentrate mix, usually containing urea, 20% crude protein, minerals, vitamins and a rumen modifier such as rumensin.

“They can’t come from improved pasture in Southern Australia, be turned out in the paddock and expect them to firstly survive and secondly be in working condition in a northern environment that is 41-42°C with a pasture base that has a crude protein level of 2.5-3%” says Dan.

“Even though there are southern bred bulls that have been at “Tara” for 2 years now, some haven’t been able to adapt, they just cannot handle the environment. Whereas the bulls bred from our AI program generally handle it, no trouble at all. We credit it to the cross breeding and being bred in the environment that they have to survive in” states Dan.

Prior to joining, the bulls on “Tara” undergo BullCHECK testing, including full semen morphology. At the most recent BullCHECK event in early December 2020, the Angus cross home-bred bulls were all in forward store condition, averaging a body condition score of 3, while the southern bred Angus bulls averaged 2. Mark and Dan will wait on the semen morphology results and use it to select the bulls to be used this year, provided the bulls passed the other BullCHECK criteria. If a bull does not pass, it is given another year to acclimatise.

The difficulty of acclimatising southern bred bulls to Northern Australia is what Dan views as the biggest challenge in using the breed.

“I think the biggest challenge we have ahead of us in moving into flatback cattle and Angus is being able to source seedstock animals that will adapt to our environment in Northern Australia” he says.

Changes in the time of year that bulls are received at “Tara” from southern Australia and their induction present opportunity to achieve a smoother acclimatisation. However, Dan feels that a key part of the solution is recommencing the fixed time AI program, right where he started introducing Angus Genetics to his herd.

“Angus have the depth in their genetics and they have also got the demand f or their product, that is why I am pursuing the Angus breed” he explains.

“What I think the answer will be is that when the seasons change, and we can actually get back to fixed time AI is actually breeding our replacement bulls on property” says Dan, “I would gladly do it in the future, we just haven’t had the seasons there to do it”. 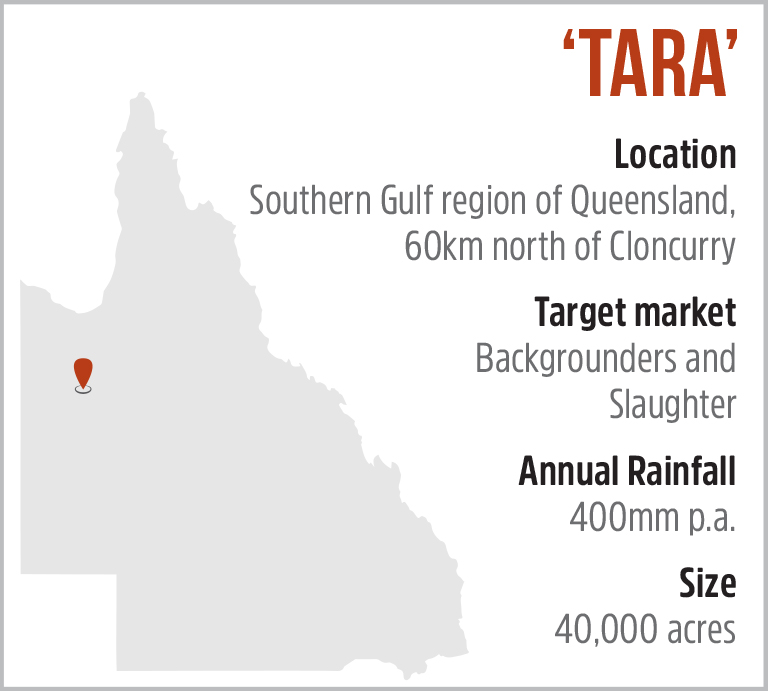