The review and updating of the selection indexes that are published in the TransTasman Angus Cattle Evaluation continues to progress.

The Angus Breeding Index, Domestic Index, Heavy Grain Index and Heavy Grass Index, are economic indexes that balance the genetic merit of animals for individual traits to produce an overall “score” of an animal’s combined genetic value for the breeding objective defined by each index.

The economic and production parameters that underpin the four selection indexes, along with the software that is used to calculate the index values, were updated in December 2020.  However, based on feedback from members, the updates were removed to enable further consultation and development to be undertaken during 2021.

The first stage of this consultation was undertaken in April with the conduct of a member survey, and the facilitation of a number of focus groups.

Further information regarding the outcomes from this consultation, along with the next steps that will be undertaken in the updating of the selection indexes, is available below.

Angus Australia Members Have their Say

Feedback from the Focus Groups

Where to from here?

ANGUS AUSTRALIA MEMBERS HAVE THEIR SAY

Angus Australia members, and other interested parties, were invited to provide feedback on the selection indexes via an online survey and a series of focus group consultations conducted during April 2021.

Feedback was sought on the importance that members place on selection indexes within their breeding enterprise, reactions to the updates that were made to the selection indexes in December 2020, suggested improvements to the manner in which selection indexes are calculated and displayed, and desired outcomes in the next five years in their Angus breeding programs.

FEEDBACK FROM THE ONLINE SURVEY

A total of 199 individuals completed and returned the survey to Angus Australia, with 98% of respondents being Angus Australia members, including a mix of seedstock producers, commercial producers, service providers, semen distributors and feedlotters.

The existence of two distinct groups of respondents was further evident in the feedback regarding the specific aspects of the December 2020 updates. 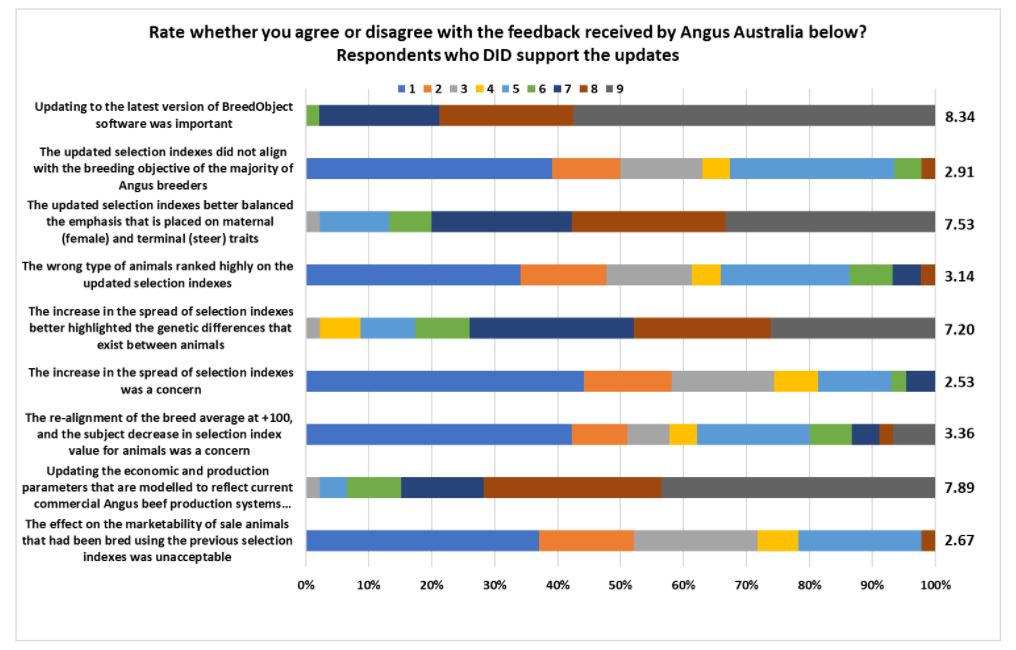 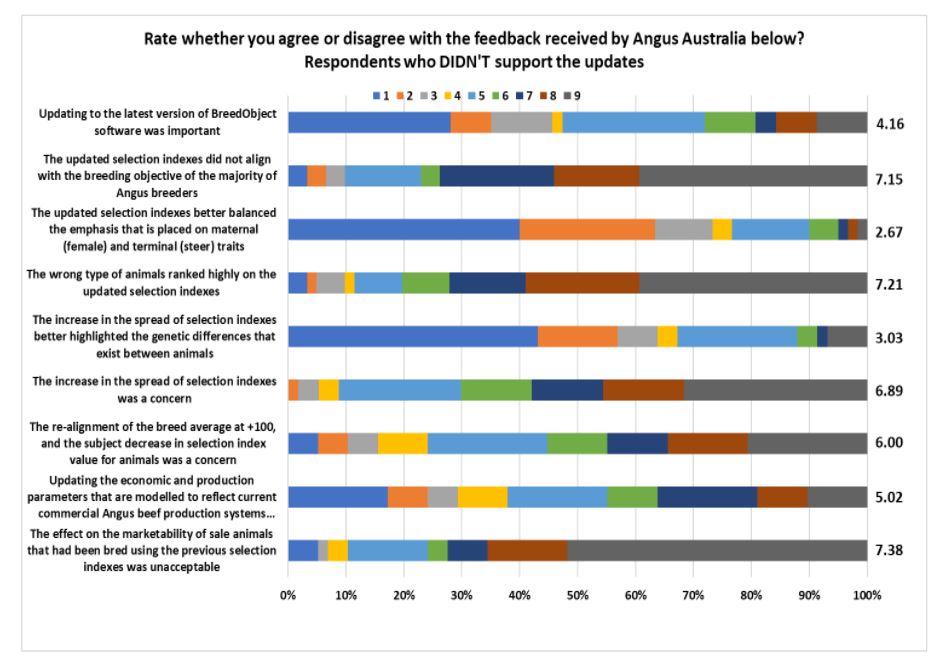 FEEDBACK FROM THE FOCUS GROUPS

The focus groups highlighted that there is great diversity in the importance that Angus breeders place on selection indexes, and the role that selection indexes play within each breeding enterprise varies considerably. Selection indexes were generally considered to play a greater role in the marketing of Angus seedstock cattle relative to their use as a selection tool.

Consistent with the results from the online survey, focus group participants expressed a diversity of views regarding the selection index updates that were released in December 2020.

Feedback supported the availability of a greater range of selection indexes to better accommodate the diverse range of production systems and breeding objectives that exist across Australia.  In addition, it was suggested that greater ability should be available to enable seedstock breeders to choose which selection indexes, if any, are displayed in their marketing materials.

WHERE TO FROM HERE?

With the completion of the online survey and focus groups, the Angus Australia Board participated in a workshop on May 27th 2021 to review the feedback obtained during the consultation process, and determine a strategy for the future calculation and display of selection indexes.

Presentations were delivered during the workshop by geneticists with expertise in selection index development from the Animal Genetics & Breeding Unit, the Agricultural Business Research Institute, AbacusBio and Angus Australia.

The member consultation will include an online survey, focus group sessions, and review by the Genetic Evaluation Consultative Committee.

Subject to the feedback received during the member consultation, the selection indexes that are published in the TransTasman Angus Cattle Evaluation will be updated in late November in association with the December 2021 analysis.